No Time to Lose

Waking up to climate change 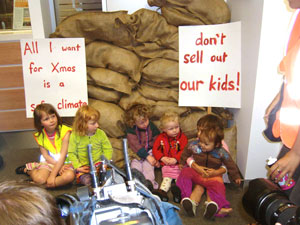 Talitha Ray, Amy & Mhairi Cornford and friends have sand-bagged the office of Nicola Roxon, Federal Member for Gellibrand and Minister for Health, to hold back rising sea levels.

Over the last 9 months I have been significantly prompted by God to see the issue of climate change with new eyes.  With my 'new eyes' I find myself and our household responding and making decisions with an imperative that for me can only be understood as a response to a revelation from God.

For me, this revelation started when I learnt about the impact of climate change upon the poorer nations of the world.  In July 2008 I attended the TEAR National Conference and heard one of the TEAR workers talking about a recent trip to Bangladesh.  He spent some time with a family living on the coast in Bangladesh who have been forced to move 5 times in the last 7 years because of rising sea levels, and increasing salt in the soil.  I later heard another disturbing story from the Cartaret Islands, which are part of Papua New Guinea.  Here high tides have been washing away homes, destroying vegetable gardens and contaminating fresh water supplies.  In 2007 the PNG Government began the evacuation of the islands. It is estimated that by 2015, the Carteret Islands could be largely submerged and entirely uninhabitable.

My revelation has become a great responsibility, and I realise that climate change is not just about the future, but it is here and now.  For millions of people with whom we share God's earth, our climate is changing now.

How can we hear Christ's command to love our neighbour and ignore this?

In Genesis 2:15 we read that God took Adam and put him in the Garden of Eden to work (abad) it and to keep (shamar) it.  The verb, shamar, is also found in the familiar Aaronic Blessing; "May the Lord bless you and keep you...".  Shamar invokes an active caring, sustaining and life-fulfilling way of 'keeping' the earth, modeled by God and expected of us.

Yet the science is now showing more and more clearly just how far we have turned from 'keeping' the earth.  Debate over climate change took a radical turn in September 2007 when research revealed that the floating sea-ice in the Arctic was disintegrating roughly one hundred years ahead of schedule.  Since this event scientists are confirming that previously ignored 'feedback effects' indicate the speed of climate change to be considerably worse than anyone had thought.  A sea level rise of one metre would affect 200 million people living on coastal floodplains around the world, but some scientists now predict a five metre rise by the end of the century.

There is no science that is going to offer 100% absolute certainty of what is happening.  But we need to see this in perspective.  If we make changes in our lives, and the science is wrong, it is still good for us.  If the science is right, and we do nothing, or not enough, then we face terrible suffering worldwide.  The demand of love is too great for us to ignore.

So what must we do here in Australia?  Understanding where the greenhouse gases are coming from helps us to see clearly where  we need to change.  In 2006, electricity use accounted for 35% of our national green house gas emissions, agriculture accounted for a further 16% and transport for 14%.

The challenge is immediately personal.  Have you switched to 100% Greenpower?  Have you checked drafts around your doors and windows to reduce your use of heating?  Have you reduced your use of a car?  Can you eat less red meat?

The challenge is also political.  The Government's proposed Carbon Pollution Reduction Scheme aims to have reduced our nation's emissions in 2020 by only 5% from the levels that they were in 2000.  The 2007 International Panel on Climate Change report recommended emissions reductions of 25%-40% from 1990 levels to try to contain global warming to a rise of 2.0-2.4 degrees.  Even with a 2 degree rise, species loss is estimated at 15%-40%, and freshwater loss at 20-30% in vulnerable regions.  Australia's target of 5% reduction is worse than irresponsible.

To make matters worse, the current design of the proposed scheme effectively works to nullify any voluntary actions that you or I might take to reduce our emissions. Under the current design, if you pollute less you are simply giving someone else permission to pollute more.

The challenge is urgent and we are currently failing. So which day this week will you visit your Federal MP?