Waking up to our mess

The problem of e-waste 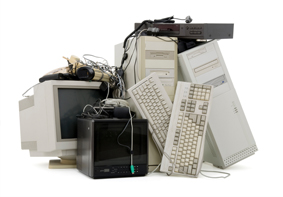 About six months ago I was invited to take on the management of Green Collect’s warehouse space, which primarily involved taking responsibility for corporate collections of e-waste. Green Collect, a not-for-profit environmental charity, provides a range of environmental services to Melbourne businesses that promote recycling and waste minimisation.

In Australia, electronic waste (e-waste) is the fastest growing source of waste, growing three times faster than regular waste. There are an estimated 9.2 million computers in use around Australia. It is expected that in the coming year a further 2.1 million computers will enter the market, while 3 million will end their life. Presently only 3% of e-waste in Australia is recycled; the rest is shipped overseas or disposed of in landfill. Land filling e-waste is hazardous to the environment and to human health because substances such as arsenic, cadmium, lead, mercury and nickel can leach into the ground and water. These substances have been associated with diseases such as cancer and neurological disorders.

Due to the toxic nature of e-waste, Green Collect out-sources most of the breakdown process to e-waste recyclers. Most, if not all, of these recyclers will ship waste created in this process overseas to countries such as China, Nigeria and Indonesia.

There are limits on what these companies can send as Australia is a signatory to the Basel Convention. The convention aims to protect human health and the environment against the adverse effects resulting from the generation, management, transboundary movements and disposal of hazardous waste. It was initiated in response to hazardous waste trafficking from the wealthiest to less wealthy countries. Despite this convention having 175 signatories, the majority of e-waste is still dumped in China. For Western countries shipping waste to China is up to 10 times cheaper than disposing of it under Western safety and environmental standards.

It has been difficult to secure an assurance from recyclers that our e-waste would not go overseas. There is mistrust within the e-waste sector and a culture of tearing down the reputation of a competitor’s claim of best practice.

Adding to this growing e-waste calamity, at the end of 2013 the government will switch off the analogue television signal across Australia. This is what you’ll find on the Australian Government website:

There’s no need to wait — in most areas you can switch to digital TV now. However you do need to be ready by the time the switchover is completed in your area, or you won’t be able to watch TV.

The obvious question is what happens to all the obsolete televisions and radios. The short answer is landfill. It is estimated that 1.5 million televisions are dumped each year, and this figure is expected to spike in the next 18 months. Lead and mercury are just two of the many toxic components of a television set that can have extremely dangerous effects on humans and the environment. The process to safely recycle and dispose of one television is costly.

Who will pay that cost? At present, the cost is paid by the environment and the Third World? Who should be paying the price?

The electronic equipment we purchase today is designed to be hard to upgrade, easy to break and costly and impractical to repair. The eighteen or so months we use these products are just a blip in their entire life cycle. This is a key strategy of electronic manufacturers. Bad design produces goods with limited life, which are quick to throw away with no consideration of the cost of disposal. Often these products are assembled in the Third World where workers are not adequately protected from toxic compounds and chemicals. Most of the issues associated with e-waste can be solved with a more whole system approach and encouragement of more responsible design.

Until such a time I believe we are reacting to a growing issue that many of us are unaware of. For instance, just last week we received 30 CRT monitors from a local primary school. CRT monitors are bulky and take up a lot of space in comparison to newer technologies such as plasma and LCD. CRT monitors are considered old technology, which is why we receive such large quantities. The monitors were made redundant due to their age and were being replaced by new flat screens. In all probability these monitors are still in good working order. We don’t test these machines as there is no resale value and we are not equipped to safety tag for possible sale as the cost is prohibitive. Our process for all equipment received is resell, reuse, refurbish or recycle. When we receive CRT monitors they are stacked in a growing pile in the hope that a viable recycling option will present itself.

Our attempts to safely break down these monitors has convinced us that the health risks are too great. Furthermore, the process is very labor intensive and we are left with materials which are difficult to sell on. In terms of outsourcing the recycling process, one company we have used in the past has not met with our criterion of transparency whilst another openly admitted they would dispose of them in landfill. For the past 10 years it has been illegal in the US to dispose of CRTs to landfill or incineration. Currently there is no national framework or policy for the responsible collection and disposal of e-waste in Australia. The mountain grows each week.

These two forms of e-waste highlight inadequacies in design, in governance and ultimately in our consumer habits. Bad design is responsible for the creation of products with built-in obsolescence whilst using compounds producing toxic and hazardous waste. Better design and the use of proven recyclables would alleviate much of the e-waste issue. As we have seen from overseas examples, government and regulatory bodies are taking action and passing e-waste legislation with effect. In Australia, it would seem we are largely ambivalent about e-waste, and this ambivalence extends to our policy makers and regulatory bodies. Extending responsibility to the manufacturer for disposal is an obvious place to start.

Ultimately, however, the problem is our rate of consumption. The combination of obsolescence, rapid growth of technology and our insatiable desire for the next new thing drives demand for these products. How do we weigh our perceived need for a new product against the cost to lives and the environment? Can we do without an upgrade? Can we avoid using batteries? Consider using rechargeable batteries, which are easily recycled, longer lasting and over time more cost effective. Avoid toys which require batteries. Pay more for longer lasting and more thoughtful product design. Resist the urge to upgrade when the next best thing comes along.

If you are interested in further information, a useful resource is a short documentary found on the internet called ‘The Story of Stuff’. I can highly recommend it.