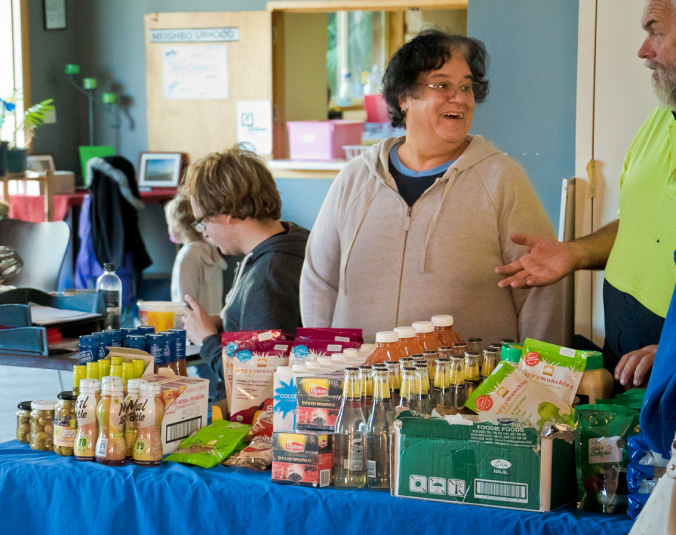 SHARING food has been a key plank in the lives of communities of all kinds throughout human history. Eating, working and relaxing with others is a glue that cements relationships, embraces strangers and creates safe spaces for people of all ages and backgrounds to grow, learn and celebrate together.

That kind of safe space has long been needed in the northern Geelong suburb of Norlane. The area enjoyed its heyday in the 1960s as a busy working class neighbourhood housing workers from nearby factories, including Ford. When the car industry went into decline in the 1970s, hundreds of Norlane residents lost their jobs and many are now mired in long-term unemployment and generational poverty.

In 2004, a small group of Urban Seed workers from Melbourne moved into a Baptist Church building there and started a weekly get-together for all comers in what became known as the Long Room Community Meal. They opened a café, Urban Bean, in the run-down local shopping square and produced much good before the keys were handed over to another community enterprise in 2013.

A fresh chapter opened six years ago, when Simon and Kaylene Reeves moved to Geelong after living and working in Alice Springs for 12 months. Since the couple’s arrival, a team of 15-20 core members has developed and spread over six houses, all located within five minutes’ walk of the church buildings, backed by about 60 volunteer supporters – most of whom are long-term locals.

“About four years ago, Urban Seed Norlane was offered weekly access to surplus food, but we didn’t want to simply hand it out,” Simon said. “At the same time, we’d been hearing a lot from single-parent families locally, saying they were having trouble making ends meet and finding there wasn’t enough money at the end of the day for food. Many didn’t have employment and had time up their sleeves, so we put all that together into an initial concept involving membership, being a collective and use of volunteers and people loved it. Along the way, we had a chat with Marcus Curnow at Newmarket Baptist, which also has a People’s Pantry, and took some ideas from there.”

People’s Pantry began about four years ago primarily for holders of health care cards who live in Norlane’s postcode area. “At the start, we opened it up to 30 households and that filled within a month. We upped the cap to 50 and that was reached within the next month.” Membership is still capped at 50 households, with extras added to a waiting list.

Hannah Reeves and Stuart Downie are the current co-ordinators of the project. “We found we were getting lots of donations of food and we wanted to use those well around the neighbourhood,” Hannah said.

“Rather than simply handing food out, our idea was to create a sustainable weekly model where people were working together to feed each other and could be encouraged towards healthy eating and lifestyles, operating as ethically as we could.

“Elsewhere in Norlane, people can find food at the Salvos and Uniting Church, but what makes us different is the membership model. People are paying to be a part of something, participating and sharing together.

“Membership costs $10 for six months and that money goes back into sourcing more food from our suppliers – principally Foodbank Victoria, SecondBite for fresh fruit and vegies and Geelong Food Relief. It’s financed wholly by memberships, with costs running to about $30 a week. Each week, we normally get people from 20 to 30 households coming in.

“Our volunteers are rostered at least once a month, helping with set-up, operation on the day and packing up later, but we’re also trying to involve them more in sourcing the food.”

The Pantry is set up in the Long Room every Wednesday during school terms for one hour, offering snack foods, sauces and preserves, breads, rice and pasta, breakfast cereals and canned goods, plus packaged cooked meals when available.

“We’ve seen a growing sense of ownership,” Hannah said. “There’s a community meeting at the beginning of each term and we’ll get 20 people there discussing how things are working and new ideas to be tried. There are always minor issues around people wanting to jump in first or feeling others have taken unfair amounts, but members tend to react strongly at those times and want to do something about it.”

Stuart arrived in Norlane from Wodonga a little over 12 months ago, after five years working for the local Woolworths supermarket. We like to try for as much fresh produce as we can, such as milk and bread, but what also go pretty quickly are the snack foods, cereals, pasta and canned goods,” he said. “We normally have a lot of sauces, but people don’t need those on a regular basis, so they’re slower to move.

“We hear some nice stories about members making up small parcels of food they don’t require and giving them to next-door neighbours or others in the community who do need it. That’s exactly what we’re all about.”

People’s Pantry member Shirley has been a regular at the Long Room for the past three years, after hearing about it from her cousin. “I go there three days a week, helping prepare for the Monday night dinners, going to meetings, a lunch and People’s Pantry on Wednesdays, then running a playgroup on Thursdays,” Shirley said.

“People’s Pantry incorporates everyone doing their little bit and it’s hands-on. There are three trestle tables set up and you actually pick your own food. They give out numbers and everyone takes their turn. They get certain amounts of food from each table depending on the size of their family, plus there’s a ‘share corner’.

“It’s a community involvement thing – you don’t just get your food and go. You need to be a part of it and take ownership.

“I feed myself, my older daughter and child and one of the best things about the Pantry is being able to access that food for a cheap amount of money. You can usually get food to last you the week, with some extra stuff. It’s a great service and well organised – plus you’re meeting people and getting out of the house.”

Fellow member Debbie agrees. “In my household, there’s me and six children and I’ve been (with the People’s Pantry) for about three years,” she said. “I go every week and it helps out with the food at home. I also go for lunch on Wednesdays and sometimes the Monday night meal or Thursday family nights.

“I like meeting new people and we have a lot of friendships there. It’s good to help out people less fortunate than you.”