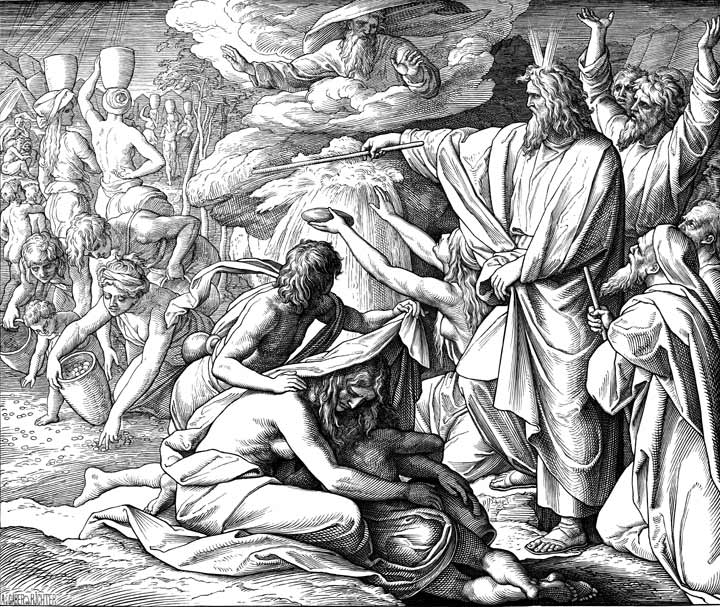 To live we must eat food. But how shall we get it? This is what John Maynard Keynes called ‘the economic problem’. But if food is basic to life, then this is also a religious problem. In the Old Testament account of Israel, coming to terms with this problem lay at the root of the nation’s birth.

The story of how the wandering Israelites were sustained in the wilderness by manna from heaven (Exodus 16) is a Sunday school favourite. Yet the story of the manna is one of those foundational stories of the Bible; once you pay attention, you start to see references to it everywhere. And it is all about economics. Unfortunately, it is a story that hardly makes it out of the Sunday school room.

The essential background to this story lies in the fact that the Israelites have just been liberated from slavery in Egypt where they were building Pharaoh’s great store cities. There, they had been part of an economic system that had made amazing technological leaps and produced enormous surpluses of wealth, but it had done so at the cost of extreme inequality and the enslavement of large sections of the population.

After a dramatic escape, the Israelites find themselves wandering in the wilderness of Sinai. They are free of their servitude to the Egyptian economy, but they are at a loss to know how they should now live. Just like the addict who is terrified by the unknowns of a new life, they begin to contemplate returning to the slavery of Egypt: “There we sat round pots of meat and ate all the food we wanted ...” (Exodus16:3).

It is here that the Israelites are offered a strange new economy, one based on ‘bread from heaven’ (v.4). Their perplexity is underscored by their naming the bread ‘manna’, meaning ‘What is it?’ (v.31). However, there are rules associated with this new system:

Needless to say, the principles of the manna economy are the exact opposite of the Egyptian economy from which they have just been liberated. Not only do the Israelites have to learn a new way of living, they have to unlearn the old way and, as the story indicates, this is not easy for them. In fact, in Deuteronomy 8 we learn that the Israelites needed to learn the lessons of the manna economy before they could enter 'the Promised Land'.

The lessons of the manna economy echo through the life and teachings of Jesus. In his response to the first temptation from Satan ('Turn these rocks into bread') he responds by quoting Deuteronomy 8:3 - 'Man does not live by bread alone' -  which is part of an exhortation to 'remember' the lessons of the manna in the wilderness (see Matthew 4:1-4). When modelling prayer, Jesus addresses material needs by invoking a manna economy, asking "Give us this day our daily bread" (Matthew 6:11). The teaching on prayer is followed by a series of teachings on money and possessions, in which the lessons of the manna loom large: 'Do not store up treasures for yourselves' (Matt 6:19); 'Do not worry about what you will eat and drink [...] Your heavenly father knows you need these things [...] So do not worry about tomorrow' (Matt 6:25-34). In the feedings of the 5000 and 4000, Jesus demonstrates the presence of unforeseen abundance when there is a communal concern that none have too little (see Mark 6:30-44 and Mark 8:1-10).

The apostle Paul also pointed to the story of the manna. When encouraging the wealthy church in Corinth to send financial support to its poor brothers and sisters in Jerusalem, he directly invokes the manna rules, summing them up by stating: 'The aim is equality' (2 Corinthians 8:14).

The great challenge of our time is to rediscover what living by a manna economy might actually look like. How much is 'enough' and how much is 'too much'? Our need to learn these lessons comes into stark relief when we apply them to the use of the earth's natural resources: contrary to being scarce resources (the way in which we normally think of them), can we learn that they are actually abundant for our needs, if only some of us can learn not to gather ‘too much’?