Some time ago, I had a personal revelation: loving God and serving him can be as simple as loving and preserving the world which God so lovingly created. Further along in my faith journey, I found myself drawn to sharing life with people who had been broken by life’s struggles. Living life in this way revealed to me the extreme inequality that exists within our nation and hence I became much more interested and aware of issues that affected the people within my community. I learnt that while $8 billion worth of edible food is thrown out each year, almost 90% of food relief agencies don’t have enough food to meet demand. On further investigation, I discovered that 20-40% of fruit and vegetables are rejected before they even reach the shops because they don’t look pretty enough.

Australia is one of the highest per capita waste producers in the world, ranking in the top five most wasteful nations. We produce over 18 million tonnes of waste per year—the equivalent of three million garbage trucks full of compacted rubbish.  Inspired by the overwhelming enormity of the problem of waste in Australia and its vast impact on the people in my community, I joined some friends in my debut dumpster diving venture.

It has been many years since that first expedition. I remember the disbelief and incredulity I experienced that first night. I couldn’t believe what I was seeing: copious amounts of fresh produce still within its 'use-by' date yet passed its 'display until' date; crates of unopened tins and jars of food that had sauce of some description spilt on them; overly-packaged processed foods with slightly damaged outer packaging; cartons upon cartons of eggs with only one or two cracked eggs in them. I was astounded!

Many years on, I witness this same astonishment and disbelief each time a novice diver accompanies me on one of my weekly trips. Having been a ‘diver’ for some time now, my predictions of what I might find are usually pretty spot on… however, some nights I am still amazed at just what we find. Regularly, we come across a ‘Stuff’ dumpster. This occurs when the store clears out non-food items that are not selling as quickly as they would like. These items can include clothing (and lots of it), electrical goods, camping gear, cosmetics, gardening equipment, kitchen wares, toys…and the list goes on. Most commonly, these items are still in their packaging and in perfect condition (except the packaging may now have a splatter of spaghetti sauce smeared over it, as a casualty of being thrown in the bin).

It has become my mission to rescue this ‘stuff’ and distribute it to people who are in need of such things. I have made very good use of the charity donation bags that are regularly left in our mail box. My other reason is to prevent such items from ending up in landfill without even having been used. It does my head in that so many items are shipped all the way here to Australia (predominantly from China). They are then transported to stores, only to be transported again to land fill, where depending on what they are made from, they can take thousands of years to break down.

As with many ventures or activities, my motivation for dumpster diving has changed over time. Ten years ago, when I first began, my life looked quite different to what it does today. In my early dumpster diving days, I was fiercely passionate about actively responding to unjust societal issues that affected the people in my community. Living life with the broken was my primary vocation and I dedicated all of my time and energy to it. Dumpster diving became an integral part of this. I remember feeling quite liberated by the idea that by living off the waste of our society, I could spend more time doing the work that I loved, rather than the kind I simply got paid for. Dumpster diving helped to build and strengthen our community. My housemates and I were often accompanied by community members on our weekly dives, who would then help sort and clean everything, ready to distribute to others the next morning.

Today, with two young children in tow, my life is not quite as ‘radical’ as it was ten years ago. However, dumpster diving is now even more important to me. It is an activity I strongly believe in, and one of the few I can still engage in, whilst caring for a young family.  Dumpster diving allows me to pursue the issue of waste that I am passionate about. It also provides me with opportunities to share and discuss this issue with others. 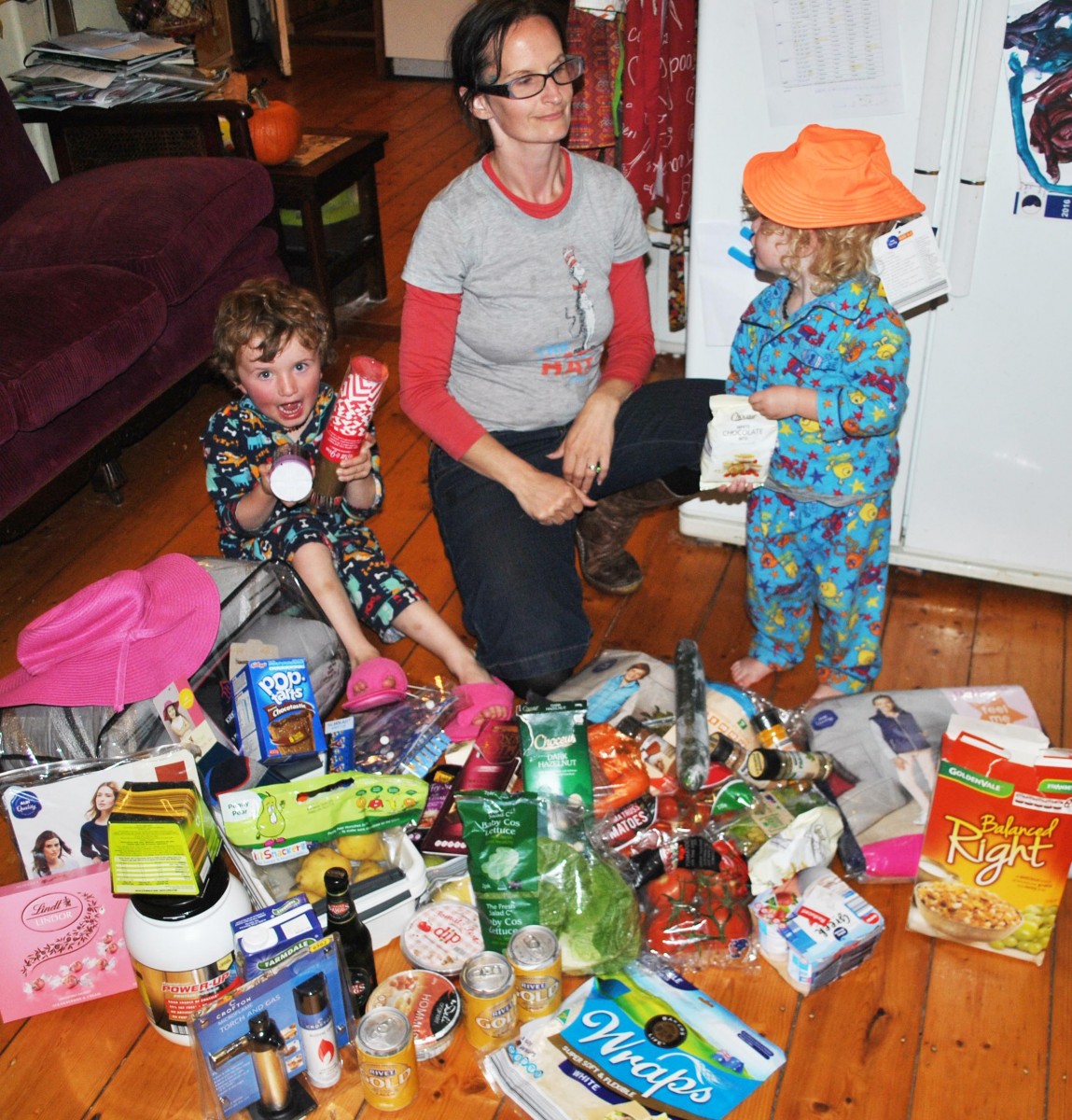 My usual dumpster diving route takes about two hours (depending on the night). With hubby at home with the kids, the two hours of adult company is a treasure in itself. Over the years, we have built up something of a dumpster diving community. In my local area, there are about ten people who come diving with me on either a regular or semi-regular basis. Each of these people dive for different reasons, ranging from ethical to financial to social. Typically, we head out after dark, or at least an hour after stores close for the night. Usually, I go with one or two others. On occasion, four or more of us may break into two teams and each visit the loading bays of different stores, where the dumpsters are kept, and meet up later to sort and swap the produce and wares. There have been some nights when we have needed to drop off a car-load  of ‘stuff’ at home before heading back out to finish our route.

People often ask me, ‘have you ever been caught ?’. The answer to this question is yes, many times. In fact the possibility of ‘being caught’ (by either security or store managers or just a passer-by) is a really important element of dumpster diving for me. I consider being open to, and suitably prepared for, such encounters a significant opportunity to draw attention to the wastefulness of our society. The trick is to do this in a manner that can be received well. 1 Peter 3:15 has become a bit of a mantra for me in these situations: ‘Be ready to speak up and tell anyone who asks why you’re living the way you are, and always with the utmost courtesy.’

Typically, when we encounter either staff or security it is dark, there are not many people around and they are likely nervous about just what might happen. I always try to discern the vibe before I decide how much I engage in a conversation about why we are doing what we are doing. I’ve learnt that people typically become very abrasive when the issue becomes personal. If we are told we are trespassing - a fact that I am respectfully aware of - I take this as my signal to not engage any further and just politely leave. Generally, if our conduct is calm and respectful we don’t have an issue.

Some of my more memorable encounters of ‘getting caught’ involve building relationships with security and cleaning staff, to the point that they became divers themselves. The security guard would walk by the dumpster during the day and make a mental list of anything he thought he might like. He’d then wait for us to arrive (before he headed home at the finish of his shift) and let us know he’d stashed a trolley in an alcove around the corner, where we could put his ‘loot’ for him to discreetly pick up in the morning. The cleaner attached a milk crate to the back of his bike so he could take his ‘groceries’ home at the end of his shift.

Another question I often encounter is, ‘what is the best thing you have ever found diving?’ My response to this question is often varied, depending on who is asking, as there are a lot of items that stand out. Most people are interested in the night we found a bin full of alcohol, close to a thousand dollars worth in total. However, my personal favourite was an instance of providence that was more significant than extravagant.

I had reached that stage in life where I couldn’t put off underwear shopping any longer. I had accepted the fact that I would just have to expose my two young children to a horrible big department store and spend a somewhat significant sum of money on replacing my almost threadbare collection. During this time, I was also busy making Christmas presents and had lamented not having a range of coloured cottons to sew with. Upon further thinking, I realised I would also need many more bobbins than I currently had and that it would take a long time to fill each of these with the coloured cottons. Being a mum, time for such ventures as sewing is very scarce, so I decided to be content with the white thread I already had.

On my very next dumpster dive, I found thirteen pairs of good quality underwear, all in my size, and a sewing kit that had thirty bobbins threaded with thirty colours of cotton. Who knew God’s providence could come from a dumpster?

As with all significant societal issues, my actions seem to count for very little in the big picture: salvaging food and material goods from six or seven stores on a weekly basis has a miniscule impact on the problem of waste in Australia. But then again, as with all societal issues, we all have a chance, or rather a choice, to respond as best we are able.