Home » Manna Matters » November 2009 » Who are the poor and what do they really want?

'The poor will always be with you'

Who are the poor and what do they really want? 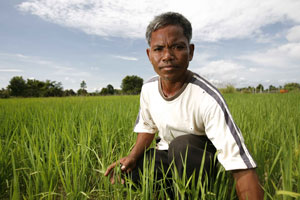 ‘Rot Set in his rice field. Rot Set has been an innovator in his village, the first to trial and adopt a new system of organic rice growing - called the System of Rice Intensification (SRI) - that increases yields and removes financial risk for the farmer. Others in the village are now following his lead. Photo by Glenn Daniels.

It is early July this year. I am sitting on the edge of a paddy field in central Cambodia and I am talking with Rot Set about the last ten years of his life. The heat is unrelenting and we awkwardly adjust ourselves to stay in the meagre shade. The Mekong river flows by, two hundred metres away. Rot Set is describing how by his hard work and the assistance of some others, the life of his family is improving. They eat well, their health is better, the children go to school. We also discuss the near future. Rot Set is shaking his head: 'If we have to move, we will be poor again.'

There is a problem with this picture

In 1997 Kim and I spent our first significant amount of time in a poor country - six months in Laos - while I did research for my doctorate. Since then I have been closely tracking the course of 'development' in that country, travelling back regularly, and over time visiting most of its provinces. In 1997 Laos was at a critical juncture in its history - it still had most of its natural resources intact, rural communities were basically cohesive and viable, the government had abandoned the worst absurdities of a Stalinist economy, aid money was pouring in, and it was beginning to build its connections to the outside world. It was a time of great opportunity but also a time of great threat.

Twelve years later the moment has well and truly passed. Like so many countries before it, Laos has plummeted down what seems to be the inevitable trajectory of development in a capitalist world - the forests are disappearing, the rivers are being dammed, the land is being stolen for agribusiness or annexed for mining, and everywhere rural communities are being physically dislocated or having their basic viability cut out from under them.

Why? How did this happen? Obviously the causes are complex and multiple, and there is a crowd of usual suspects - corrupt leaders, foreign investors, free market economics, blah, blah, blah; but there is one unlikely candidate that has lurked in the shadows for too long and needs to be brought into the spotlight: it is the cause of poverty alleviation itself.

As a researcher in 1997 it was already clear to me that the defining way by which outsiders understood Laos was as a 'poor country'. There were so many studies, reports and books all written to address the problem of Laos' poverty. How many times did I read that ranked by GDP per capita it was one of the poorest nations in the world? All the other 'poverty indicators' - health, education, access to clean water etc - also showed that Laos was a basket case. That all seemed clear enough.

However, there was a problem. As Kim and I spent time travelling in the country and visiting different communities, we wondered if it was the same place being talked about in all those reports. What we saw, or rather what struck us, was not poverty, but life. Here were so many people who lived dignified and meaningful lives, encompassed in a strong sense of family and community, and expressed in strong and vibrant culture. This was not to say that there was no poverty - certainly we could see real needs, and there were times we encountered people who were clearly desperately poor. Generally, however, the word 'poverty' did not adequately represent what we were seeing.

Who says who is poor?

But what is poverty? Who says who is poor? Despite the ease with which the word poverty gets bandied around, it is not an easy concept to define. The dominant way in which the wealthy world imagines poverty is simply a lack of money - what we call income poverty. This view is enshrined in Target One of the first Millenium Development Goal: Halve, between 1990 and 2015, the proportion of people whose income is less than $1 a day.

However, in much of the developing world, including Laos, the $1 a day definition of poverty can be misleading. For many people living in traditional agrarian societies, a large proportion of the family's production and consumption may take place entirely outside of the monetary economy - they grow their own food, collect materials and medicines from the forest and catch fish from the river.

For example, in Sekong Province of southern Laos, average yearly incomes in 2003 were only $US120 a year. Yet a study by the World Conservation Union showed that if the value of all the food and other products that people collect from the forest were to be counted in market terms, it would be equivalent to $US525 per household per year. This shows that forest resources make a significantly more important contribution to food security and health in Sekong than monetary income, yet they do not even register on the "$1 a day" poverty radar.

More importantly, this shows that if people lose access to forests in Sekong (as is happening), then even if they experience a doubling or trebling of income (thereby lifting them above the $1 a day measure and supposedly "out of poverty") they will have still experienced a decline in their standard of living.

From the perspective of Lao people themselves, poverty means quite a different thing, and in fact there is no good equivalent for the English word 'poor' in the Lao language. Here is the conclusion reached by what is perhaps the best study into poverty into Laos yet done, the Participatory Poverty Assessment from 2000:

"From the point of view of villagers in the assessment it is clear that poverty in the Lao PDR is 'new poverty', not an endemic condition. Poverty is the result of events external to the villager over which he or she has no control, especially weather, war, resettlement, livestock diseases, and poorly implemented development programs. And, because of the externality of causality, poverty is thus associated with calamity, misfortune, fate, karma etc., and hence its substance is both physical and spiritual. Also, poverty in the Lao PDR is not synonymous with hunger. Abundant natural resources have provided sustenance for poor villagers but these resources are showing signs of dwindling through overexploitation ...

Rather than talk generically about 'poverty', it is much more meaningful to talk about what Robert Chambers calls 'dimensions of deprivation'; that is, to be specific about where people identify hardship in their lives. This gets more complicated because it means the picture will change between villages, or even within villages, or even between genders. It also means that you actually have to ask people. But there are some key 'dimensions of deprivation' that are fairly common across the country:

But there is a new dimension of deprivation which is becoming increasingly significant. As Laos becomes a smaller place with telecommunications and improving roads, people in rural areas are increasingly becoming aware of their position in relation to the rapidly growing wealth in urban centres, and are seeing themselves in a different light. Now communities that never used to think of themselves as poor are keenly feeling their poverty. This tells us that inequality is a fundamental dimension of deprivation, which is another way of saying that poverty is really an issue of human relationships.

Solving poverty or creating it?

Nevertheless, the story of endemic, generic poverty in Laos was told unrelentingly by government ministers to the aid donors and by the aid donors back to the government ministers. And in telling this story to each other, it became clear to everybody that Laos urgently needed development. That meant it needed to increase its economic productivity, it needed to earn export income, it needed to become competitive, it needed to attract investment, it needed to unleash the mythical force of the private sector. The urgent need to develop and lift Laos out from poverty became the moral bludgeon with which to silence or alienate people who asked difficult questions that would slow things down.

In this rush to abolish poverty there has been no time to sit down and ask different Laotians (including the over 60 different ethnic minority groups) in what ways they considered themselves poor (if at all), what their hopes were for the future, or in what ways they would like to see their lives change. And so the relentless rush into plundering the country's natural resources described above.

The result has been rapid economic growth (averaging over 6% for over a decade) and a triumphant proclamation of falling poverty. The Asian Development Bank reports that averaged, aggregated economic data shows that the number of people living on less than $1 a day fell from 52.7% in 1990 to 28.8% in 2003. The international development community applauds.

However, just about every study of actual communities in Laos who might be described as vulnerable, has shown a very different picture. This is best captured in a 2006 follow-up study of the Participatory Poverty Assessment quoted above (ironically, also commissioned by the Asian Development Bank):

[Compared to the year 2000] villages that were revisited in 2006 were found generally to be either about the same or worse off ... the survey shows that poor villagers increasingly experience difficulty in providing food for their families. Natural resources were said to be seriously depleted in almost all locations ...

The reality is that many rural communities in Laos are in the midst of an ecological crisis that for them is also an economic crisis - their way of life is becoming increasingly untenable and they are being faced with choices that they do not want to make. But thank goodness they are no longer poor.

Which brings us back to Cambodia and Rot Set, where exactly the same thing is happening. Here is Rot Set, a man quiet and dignified, who does not consider himself poor, being told that all that he owns and has worked for will soon be flooded by a massive hydropower dam spanning the Mekong river, exporting electricity to Vietnam and a new (possibly Australian) bauxite mine in eastern Cambodia. Why? Because Cambodia is a poor country and it needs such projects to develop. Rot Set is under no illusions. Whatever they say about compensation plans and national advancement, if the dam is built his life will get a lot harder.