A diary from Dili 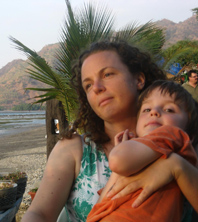 In July this year, James and Clare Batten-Laidler relocated from Warrnambool to East Timor. They have been documenting their sometimes confronting, often humorous, experiences of ‘a developing country’ on James’ blog: “Confessions of a Malae” (www.jameslaidler.net). Below are some excerpts.

We have been in our house now for a week. It’s great to have our own space and to be able to cook (although we only have a wok and one saucepan).  Our kids, Finn and Archie, are enjoying having their own rooms too.  We are living right within the Timorese community, in a ‘western’ house, but surrounded by an extended Timorese family.  Most foreigners, or ‘Malae’, live in compounds or within Malae areas, surrounded by high fences, razor wire and sometimes, security guards.  We feel safe here (even if we are a novelty to the Timorese). The Timorese families are our security.  Any crime that does occur in Dili usually involves break-ins, rather than any kind of violence.

The most confronting thing we have had to deal with is that the house we rent comes with a Timorese lady who comes for a couple of hours a day and washes our clothes and generally cleans.  At first I couldn’t deal with this at all and said no. But a friend challenged my thinking about it.  She said that ‘Malae’ have something to contribute, so they should, and that this was one of the few opportunities for work for women in this country.  She said it’s different in Timor, more communal, less individualistic, and it’s all about ‘exchange’ and ‘relationship’.  So, I relented, and even though I still find it extremely confronting, I think it is good.  I really like Ana, and the reality of her situation in life is coming alive to me more and more as we build relationship.  Ana is 29, but looks more like 40.  She only went to school up to year 7.  She has always done cleaning.  She lives with her older sister who is a single mother of 2 children.  Ana is the only income earner.  Plus, she gives money to her elderly parents in Baucau. ‘The Poor’ take on a different meaning when they become your friend.

Life in Timor Leste gets stranger by the day. It’s a place of contradictions.  A place where the various experiences you have can be very difficult to reconcile within yourself. The rich and the poor. The beautiful and the ugly. The simple and the excessive. They sit together inside you like fire and ice.

On Thursday night, for example, my son, Finn, got invited to the birthday party of one of his classmates from the School. This boy just happens to be the son of the country’s Prime Minister, Xanana Gusmao. See, told you it’s a strange place. So, we rock up at the Prime Minister’s house, steal past his machinegun toting guards, and arrive at this amazing pool party. We’re encouraged to stay, so we do; the whole freeloading lot of us. Finn quickly joins in the fun, while my youngest boy, Archie, plonks himself in the pool. I drink red wine, eat finger food and spend my time talking to some of the guests; which include a couple of film makers who have worked on films such as Balibo. Meanwhile, there are about fifty kids in the background going absolutely berserk. The kids are having the time of their lives.

In all seriousness though, the important reality that I have glimpsed in this experience is just how normal the Gusmao family is. So what if he’s a former imprisoned guerrilla fighter and national hero turned political leader. What I saw was a decent, humorous man who loves his children and was unbelievably entertaining around kids. And Kirsty, his wife, seems like a really approachable, humble and down to earth woman herself. It makes me wonder what it would be like to really get to know my own political leaders back in Australia.

At the party, Xanana came out amongst the kids wearing a plastic bag. The children went crazy, pelting him with water balloons – mind you, he gave back as good as he received. During the skirmish, both of my two boys tried to knock his block off with those little sacks of mischievousness. At one point even, my son, Archie, tried to push Xanana in to the pool! Archie had no idea who Xanana was; to him he was just this funny old bloke who was out to have a good time.

So, in the end, as I said, it was all a bit weird. And yet, having just said that, it was a normal, whilst big, birthday party.  It was a contradiction.  To get a glimpse of the man behind the name took away a bit of the whole aura thing. What a horrible burden it must be for people like him to carry; not to mention the burden of people always wanting something from you. I may have nothing to do with him again, but at least I’ve come away thinking that at least I liked the man I saw. I liked his humanity and I liked his wife too. I reckon Xanana would be a great guy to have a beer and a laugh with.

Now where did I put those car keys. It’s about time I gave Jose Ramos Horta a little visit!

I want to leave you now with a reflection from my wife, Clare. It contrasts well with my own more flippant words. Her reflection really moved me and in some ways, her words are probably closer to how I truly feel. It’s much easier to write something humorous rather than write something raw and true.

Overwhelming guilt... When I hear the sound of Ana washing our clothes.  Guilt when I see children selling goods on the side of the road.  Guilt when I think of what we pay for our children to go to school.  Guilt for not having to worry about our next meal.  Guilt for being able to buy a car.  Guilt for being invited to Xanana’s son’s party simply because we send our children to such an expensive school.  Guilt for knowing that we will simply leave this country if we get sick.  Guilt for knowing that for the majority here, even seeing a doctor isn’t an option.  Guilt...for being born into an overwhelmingly privileged country.  Guilt, for having the luxury of choosing to ‘volunteer’ here.

Layers and layers of suffocating and paralysing guilt. Guilt that I don’t know what to do with or where to put.  Please be transformed, guilt, into something constructive, something useful, as I may just lie down and give up under this weight...

Follow James & Clare’s blog at Confessions of a Malae