The Farm Next Door

‘a farmer went out to sow some seed…’

It was a warm and sunny day in early October. Nearby, a group was busily working away dressing and preparing pizza bases while others engaged in the sweaty task of navigating the rocket oven. To my right, people meander through the vegetable beds, inspecting the produce and chatting amongst themselves. On the adjacent front lawn, a stage had been erected and a sound system brought in. Live artists are strumming away while others sit back on hay bales soaking up the sun after an overcast winter, enjoying the music. Children of all ages run about between the bales and garden plots, occasionally disappearing behind the houses before bursting unpredictably back into the front. It’s ‘the farm next door barn dance’, though it has become something more akin to a small community festival.

Throughout the day, over 80 people attended the dance. People from all over Geelong had come to Norlane to attend and others came in off the street, curious as to what the commotion was all about and pleasantly surprised at what they found. It was incredible to watch strangers from all walks of life coming together over humble food, drinks and music - in Norlane, Geelong’s most disadvantaged suburb, of all places. Despite my natural pessimism, I had to wonder at what has unfolded over the past eight months.

It began in February 2018; a small group of us at Norlane Community Initiatives (formerly associated with Urban Seed) had been gathering to imagine how we could further develop our connection between ourselves and our neighbourhoods through urban gardening. Given constraints on the group’s time and energy, our dreams had dwindled to a small network of sharing vegetables between our local community houses. Then we got a call from Lachie.

Lachie was a Geelong local having grown up in Newtown, an affluent suburb in Geelong. Having graduated with a Bachelor of Environment  from Melbourne University in 2016 and not sure what to do next, he made the decision to go on a trip to France. The plan involved four months working on organic food farms in the country. While there, he was struck by the contrast of lived values between the communities he worked in and his own home town. By the time he arrived back in Australia, he had a plan to develop an urban farm in Geelong’s North which sought to provide a hub for community involvement in the sustainable production and distribution of fresh produce.

The day after we first spoke to Lachie he was at the church, at 7am, for our weekly men’s breakfast. Having the support of a like-minded group he moved fast. Within a few weeks he had performed soil testing on a property across the road from Labuan Square (a struggling shopping strip in Norlane) and promptly moved in. The property was a typical two-bedroom house in Norlane surrounded by an arid community of struggling homes and kikuyu grass.

We all got to work brainstorming with Lachie what the project might actually look like, and by April, the farm held its first major working bee. Over 40 volunteers attended from both Norlane and the Greater Geelong region. On that day, the front yard was transformed from a kikuyu wasteland into a dozen raised garden beds which have since been planted out with all manner of vegetables. Regular working bees have been held each Tuesday afternoon, garnering anywhere between 5-25 people with a core membership of around 14 plus children.

Early on, pigs and painting were a real drawcard for children, drawing in the involvement of young families. The pigs were brought in as a response to our first major project, the removal of kikuyu grass from the backyard. Two pigs, 18 chooks and a small army of volunteers worked over five months to remove the grass from the backyard. In small plots, the pigs, then chooks, were rotated over the ground removing the kikuyu before volunteers followed behind, providing the necessary detail clean.

Meanwhile, Joel, another member of the team, moved in and the project gained traction. Private individuals and organisations from all over Geelong began donating tools and building materials. Lachie’s van got a good workout visiting many a backyard in the region. Together, we invested in a community mulcher and a local gardener began dropping off trailer-loads of mulching material for compost each week. A food scrap box was advertised in the front of the yard and for a while the quality of goods made the enterprise feel a lot more like a ‘dumpster dive home delivery service’ rather than waste for a compost pile.

With community help all round, a greenhouse was built off the back of the house, a pergola off the front. Two 6500L water tanks were installed on the side of the house and, through some grant funding, irrigation pipes for the row crops. Composting bays run down one side of the property while a permanent chook run has been constructed on the other. Community workshops have been hosted at the farm, teaching skills in jam making, bread making, tool maintenance and ‘how to build a rocket oven’, which has led to many a tasty meal pumping out pizzas and pork chops. A rotary hoe was brought in and the beds were formed. As of November over half of the 16 rows have been planted out in seque,nce with tomatoes, zucchini, corn, carrots, beetroot, spring onions, beans and salad greens.

A key strength of the project has been the development of relationships near and far. The front yard utilised at the barn dance was the offering of Jazz, a next door neighbour. Steve, a Norlane resident, has been involved in the farm from the beginning: ‘the farm has been great for my kids, to be learning about how to grow fresh produce in their own back yard… working with pigs, chooks and humans is a good thing. The farm has brought a new energy… it’s been turning the stigma of Norlane on its head’. Josh, a young entrepreneur and artist in Geelong, has been similarly involved since the conception of the farm, at one point organising an artistic fundraiser at his ‘Analog café’. Josh sees the farm as ‘a space that we’ve been given to do good to those around us.’ Amrit, the son of a farmer Lachie worked for in France, arrived a few months ago and has been sleeping on the couch ever since. He’s been getting involved in every aspect of the farm's operations: ‘The farm is a good way of bringing people together, it is a good thing to work with the earth, work with the land… its relaxing and good for the brain!’.

For Lachie, the farm is about a combination of environmental and social justice. He sees the farm as ‘an opportunity for localising food production, reducing our reliance on destructive methods of food production and reducing food miles. Equally important is creating connections with and between people ‘developing a sense of community, purpose and belonging’. While he believes many people share a conceptual understanding of environmental issues, they don’t always know what to do about it. This is particularly true, he believes in a suburb such as Norlane where people might not have the means to simply buy their way into environmentalism. As I push Lachie to talk about his role in facilitating the project he redirects me to the number of individuals and groups that have contributed their time, money, skills and experience. Individuals and groups have jumped at the opportunity to help out and he considers his primary function as simply facilitating those relationships.

At the time of writing, the farm is preparing for it’s first sale of produce in the next few weeks. Plans for the future include strengthening the partnership with community members, aquaponics and hiring a shopfront.

My experience of the Farm Next Door has kept me hopeful about the significant ways in which a Christian community, working closely with others who do not share the faith, can impact a community. The Norlane Community had a good idea, experience in working in the community and some resources, but little time or energy to spare. Lachie, a young man with passion and a big heart, but not an adherent of the faith, brought what we lacked. Our mutual willingness to work together, and with others in the community, has turned the seed of an idea into something that bears real fruit. 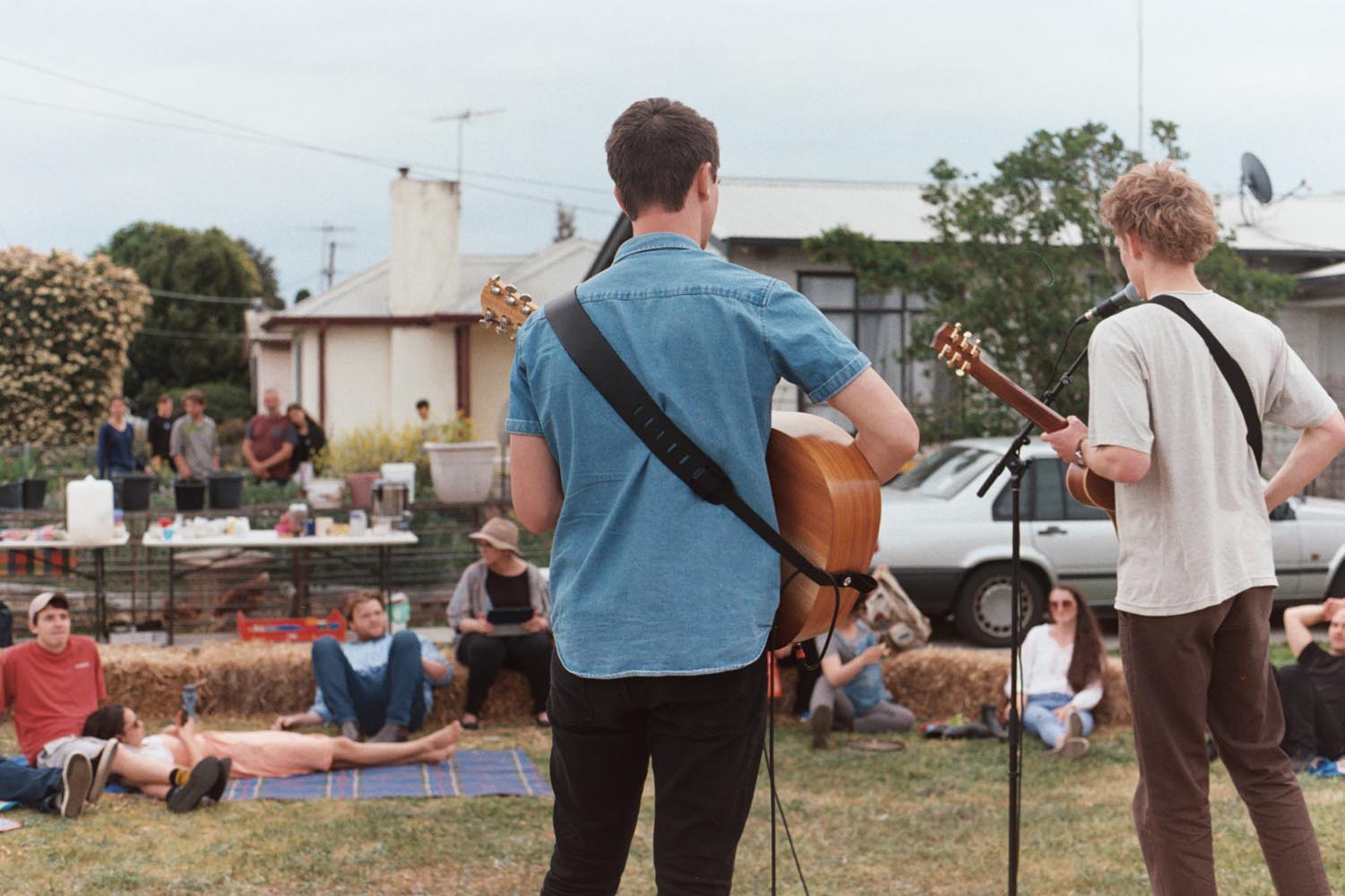